Leptis Magna, also spelled Lepcis Magna, is a Phoenician city in present Libya. It is located about 110 km east of Tripoli. An archaic quay was located on the north coast without any protection from the waves. Its date is not yet determined. After closure of the gaps between the islets, a port was built on the west bank of wadi Lebda with good shelter from western winds. The quay was rebuilt during the reign of Nero (54-68 AD). The port was then enlarged to encompass the whole wadi outlet area. A large 220 m long dam was built 2 km upstream of the wadi outlet. This dam was used to divert the flow from the wadi to the sea west of the city, to fill some cisterns with fresh water and to stop sediment from flowing into the harbour basin.

Leptis Magna and its ancient port is well-known because of emperor Septimius Severus (reign 193-211 AD) who was born there in 146 AD.

Major investigations were conducted by Renato Bartoccini and published in 1958 after 30 years of field work (see below, his detailed drawings of the port). The ‘Mission Archéologique Française en Libye’ also did much field work published by André Laronde in 1988, 1994 and 2005. Preliminary surveys were undertaken by the Universita Roma Tre between 1998 and 2007 (published by Luisa Musso et al. in 2010) and by the Universities of Oxford and Leicester in 2010 (published by Katia Schörle and Victoria Leitch in 2012). An underwater survey was performed by Carlo Beltrame in 2009 and published in 2012 (see references below).

Eastern winds prevail in summer (April-October) and the shelter was not really good for these winds, even if in the second half of the summer (August-October) eastern winds were milder: winds over Beaufort force 4 (10 to 15 knots) occur only 13 to 19% of time.

The present document is available as a pdf version including all pictures.

The following observations were made on August 24, 25 and 26, 2000, thanks to the kind hospitality of the late Professor André Laronde during his year 2000 campaign of the ‘Mission Archéologique Française en Libye’.

We walked from west to east from the eastern end of the beach close to the small temple and we were heading for the ancient lighthouse located about 1 km away (NB: distances indicated hereafter are approximate as they were measured in paces on an irregular terrain, but the total distance was known from the available charts). 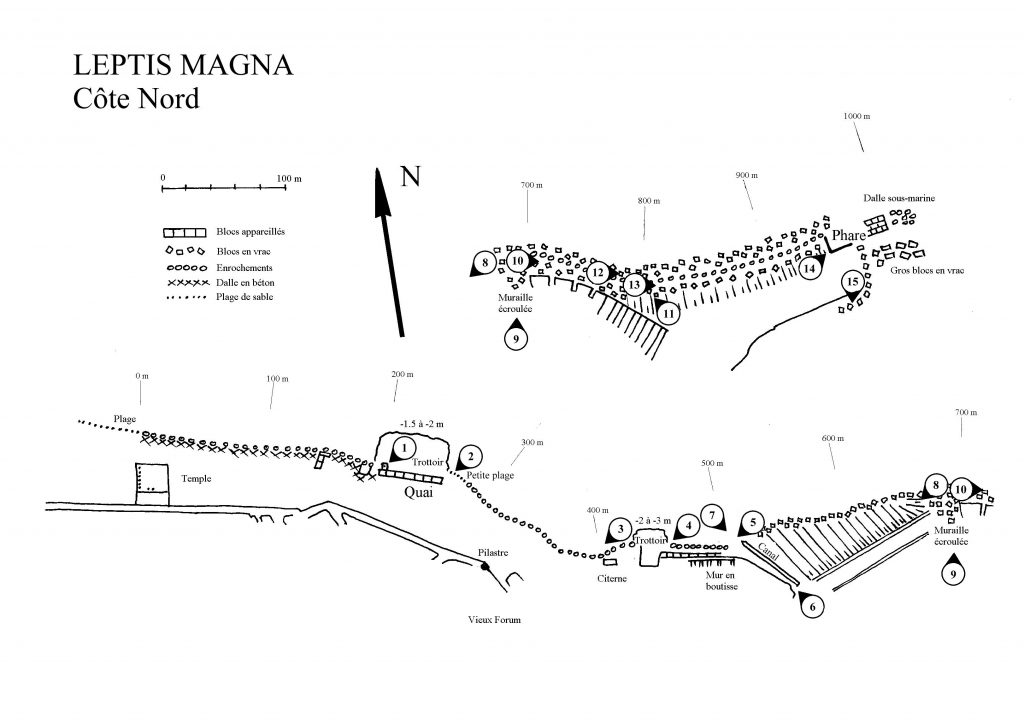 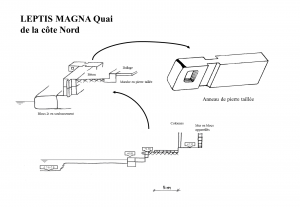 > 250 – 270 m: Small sandy beach.
> 270 – 420 m: Rubble on the beach.
> 290 m: Pilaster of the Old Forum.
> 400 m: Cistern coated with hydraulic plaster (with shards of pottery having a similar effect as pouzzolan). West of the cistern, the remains of what could have been a bathroom are found (?) (Photo 3).
> 430 – 450 m: Concrete walls forming a small building with a curved vertical opening whose use is unclear. “Trottoir” in the sea behind the sandy sea bed located around – 2 à – 3 m (Photo 4).
> 450 – 490 m: Wall with headers behind what seems to be a quay. Rubble on the beach (Photo 5).
> 510 m: Concrete canal coated with hydraulic plaster. The inside width of this canal is approx. 2 m. The canal connects the inner port to the sea and is around 220 m long according to Bartoccini. It is located at the edge of primitive port and the Severian port near the Neronian portico. It is more or less oriented towards NW. The beach-side end of the canal is sharp ended mortar and seems to close the canal. A dogleg staircase is found on the NE side. A trench is found on the SW side, perhaps an old archaeological excavation along this side of the canal (Photos 6 and 7). This structure was perhaps seen as a breakwater protecting the primitive port from waves (E. Salza Prina Ricotti), but the U-shape coated with hydraulic plaster is difficult to explain in another way than a canal. It would be worthwhile to explore the inside of the canal, to check the slope and to excavate the mouth to confirm the hypothesis of a canal. It would then have to be seen what may have been its use.
> 510 – 670 m: Slope at the toe of the wall, with pavement made of random blocks on the beach (Photo 8).
> 670 – 700 m: Collapsed wall: former passage between the two primitive islets? Foundation problem on the sea bed? (Photos 9 and 10).
> 700 – 770 m: Wall with rubble on the beach and in the sea down to a depth of around 5 m located at around 50 m of the shore. Rubble is rounded on the beach and angular on the upper beach and under water. Quarry blocks smaller than 500 kg (decommissioned building blocks?) seem to have been used as a coastal protection. Their weight is not sufficient and they have been rolling in the wave breaking area during storms, which may explain their rounded shape due to abrasion. This kind of coastal protection was reinvented in northern Europe in the seventies under the name “Berm breakwater” (Photos 11, 12 and 13).
> 770 – 950 m: Steep slope with rubble on the beach and in the sea like mentioned above.
> 950 – 980 m: Ancient lighthouse (Photo 14).
> 980 – 1000: Underwater pavement around -3 m.
> 980 – 1030 m: Blocks of 10 to 20 t placed randomly on an alignment parallel to the above mentioned pavement.
> Further south: Submerged breakwater oriented to NE and consisting of stones and large concrete masses (one of them must weight hundreds of tons). This breakwater probably formed the outer harbour of Leptis Magna. Its T-shape is visible on photo 17 and by the dark areas on the sea bed on photo 19. Photo 20 reproduces an aerial photo showing the size of Wadi Lebda and the silting up of the ancient port.

Bartoccini made the most comprehensive description of the port of Leptis Magna back in 1958. His maps are presented below.

A large 220 m long dam was built 2 km upstream of the wadi outlet and was primarily meant to divert water and sediment to avoid them from flowing into the port.

Any dam or sill placed across a river will collect the larger particles flowing near the bottom and let go the so-called ‘suspended load’ flowing in the upper layers of the stream. Hence, the area upstream of the dam will silt up.

The question of the rate of silting up is a difficult matter because estimates of the sediment discharge in semi-arid areas are extremely difficult to provide as they result from only a few flash floods per year. Reality can be approached only with orders of magnitude, e.g. it might be accepted that the sediment discharge of wadi Lebda is 10 000 m3/year (see also Pucci, 2010), but it could easily be several times more … or less. Hence, the time required to fil the volume upstream of the dam (ca. 750 000 m3 acc. to Pucci, 2010) could be anything between a few decades and a few centuries. This is disappointingly inaccurate. Additional doubt must be mentioned as wadi Lebda may have changed its regime from a perennial year-round flowing river into the dry river with flash floods we see today (a famous flash flood occurred in November 1987).

Maintenance dredging in the area upstream of the dam would have been helpful, but was surely quite difficult and expensive and therefore required strong motivation from the port authority and related commercial actors.

Anyway, after some time, the area upstream of the dam got silted up and the wadi found a way to get around the dam by its eastern side, where it still flows today. It is to be noted that the dam is quite well preserved today and that according to Pucci (2010) “The structure of the dam does not show any type of damage that could have been caused by a local earthquake or by the occurrence of a destructive earthquake that hit a large part of the eastern Mediterranean, such as the 365 A.D. Creta earthquake.”