El-Hanieh is located 25 km NW of Bayda (el-Beida) in Cyrenaica (Libya) . It is believed to be the ancient Aptouchou Hieron, or Aptoucha. 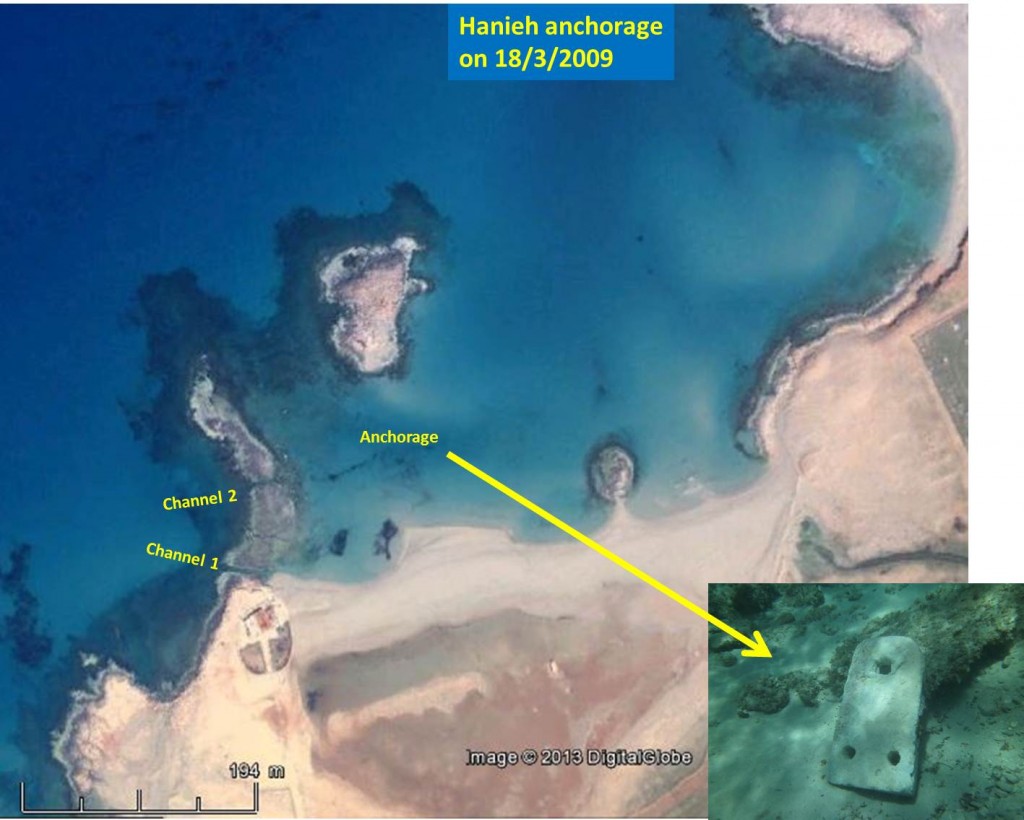 A number of ancient stone anchors were found there in the sixties by the diver Jean-Pierre Misson. More than 12 stone anchors have been retrieved, to date. They are all less than 25 kg in weight: for fairly small boats. Not a single lead stock of anchor has yet been found in el-Hanieh, seemingly indicating that no large ships used the anchorage on an extended period of time. Several lead stocks of anchors were found in Apollonia and a 50 kg stone anchor is waiting to be lifted up. The stone anchor on the picture above was retrieved in 2012. These places have ample surfaces for ships to manoeuvre. Was the “deep” portion of the el-Hanieh anchorage too narrow for large ships but good enough for small boats?

JP Misson also identified two channels cut into the rock on the rock outcrop located on the western side of the site. The present document shows his pictures and finds.
It makes use of Google Earth imagery at various dates. 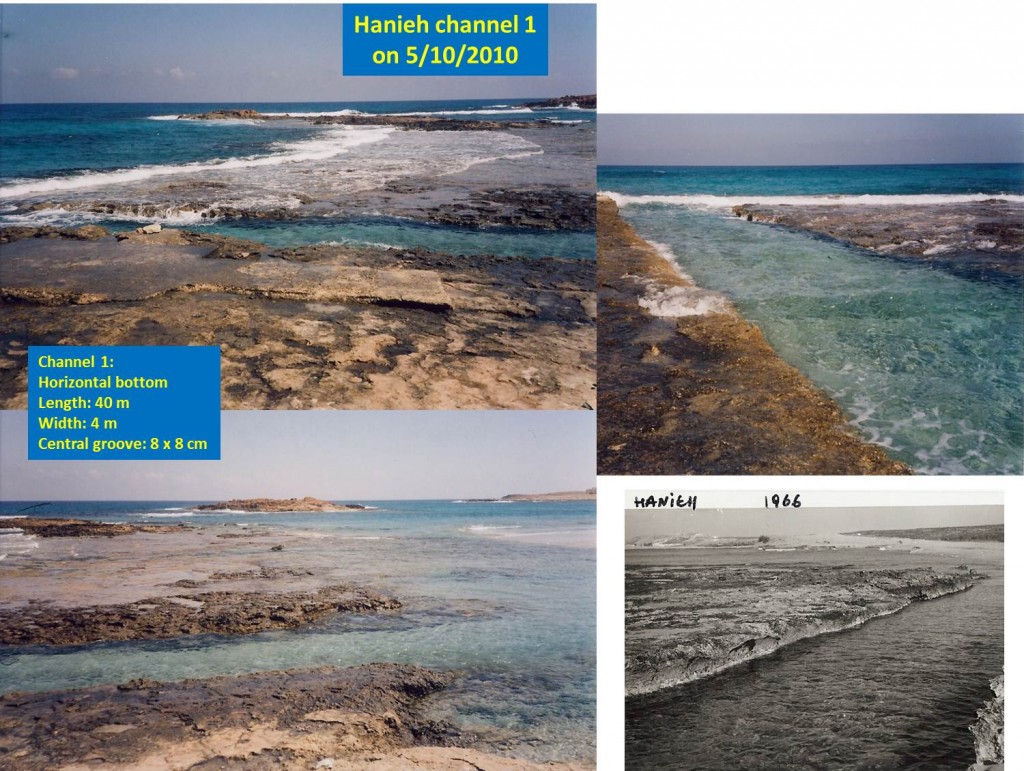 The southernmost channel, « channel 1 », is shown on these pictures.

It is remarkably horizontal with a length of around 40 m and a width of 4 m. In addition, a square central groove of nearly 10 cm runs in the centre of the bottom of the channel, on the whole length. However, the channel is considered too horizontal to be a slipway.

It might have been useful in ancient times to be able to move boats from one side of the rock outcrop to the other to find shelter under all wind conditions but the water depth is too small in Channel 1 for a boat to be floated along, particularly as the sea level rose by around 0.50 m since antiquity. Tectonic movements of the underground are not know of in this area …

So, we are left with a question as to the use of a shallow channel with a central groove. Perhaps a ship transfer system in the dry?
A semi-submerged sliding frame? 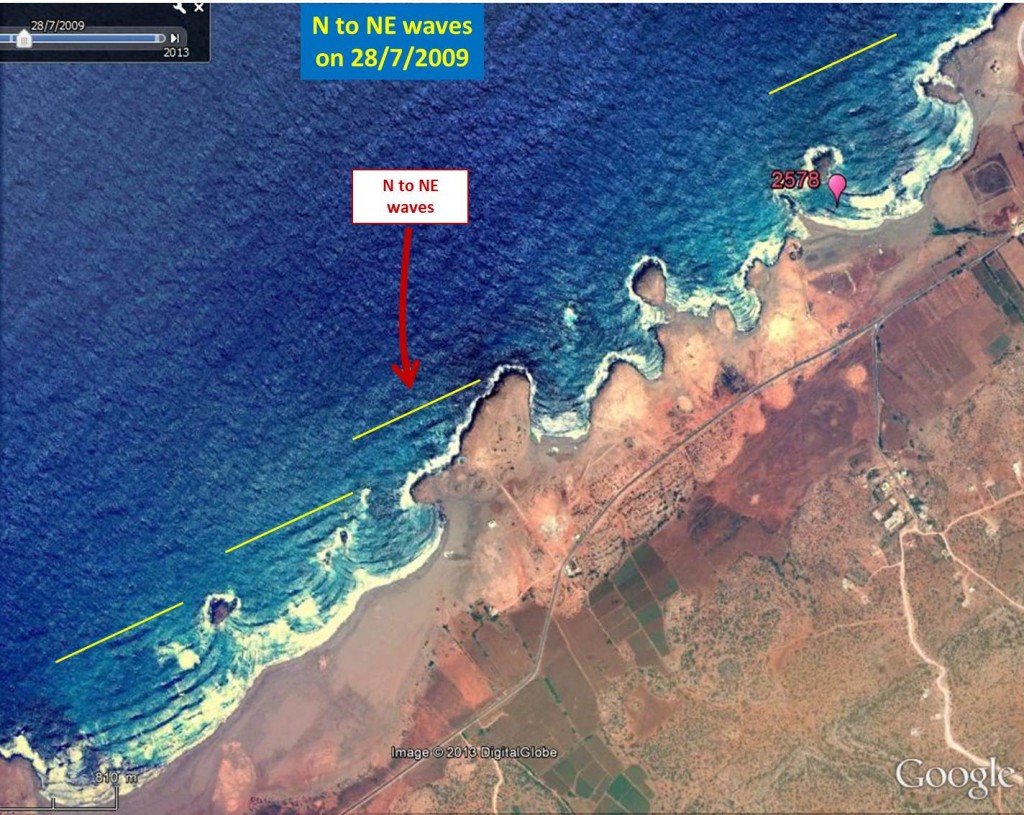 On July 28, 2009, remaining swell from N to NE was seen by the satellite and reported by Google Earth. This seems to be a fairly infrequent event in summer time. 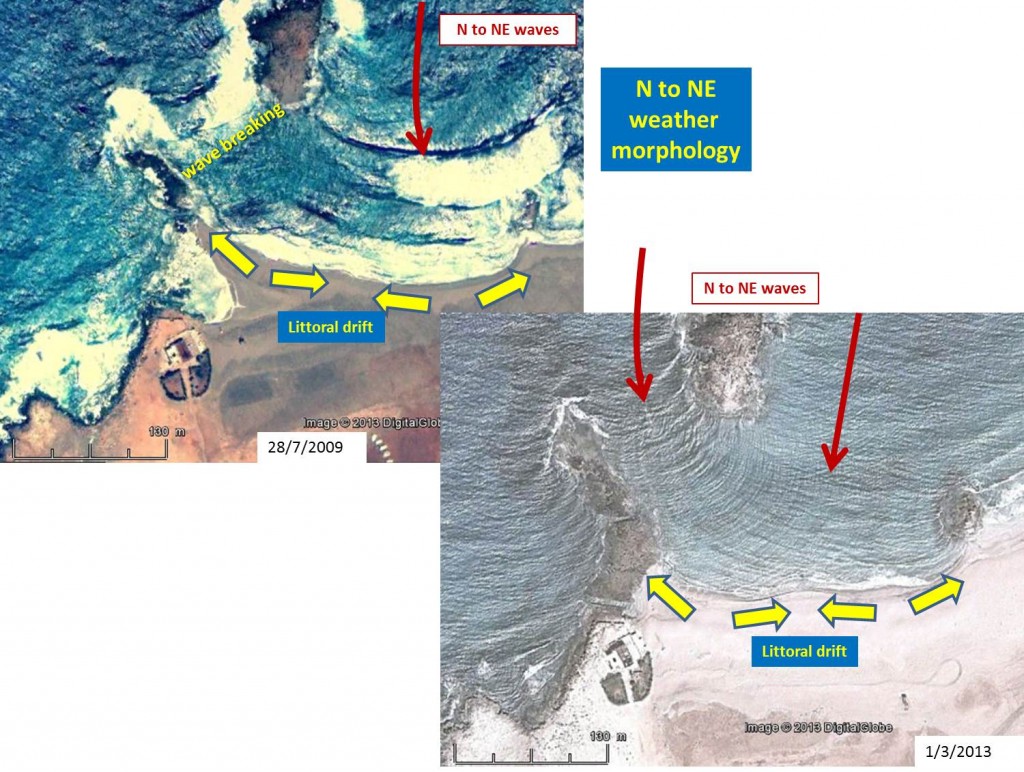 A detailed picture of wave action during this 2009 event illustrates the littoral drift (sediment movement along the coast generated by wave action). It can be seen that channel 1 is closed by sand accumulation. Channel 2 is still open.

The March 1, 2013 picture shows a similar, but milder, wave pattern. Waves are refracting and diffracting around the islet showing a double pattern of waves inside the anchorage area which explains sand movements along the coast line. 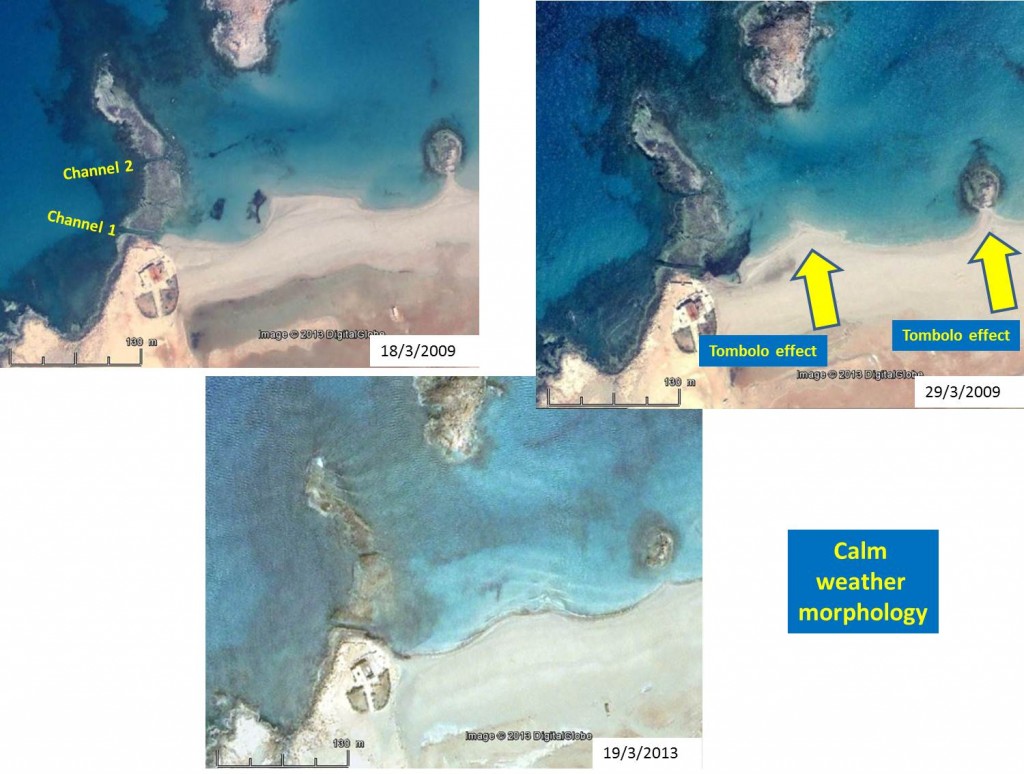 Three pictures are available in calm weather conditions, showing morphological features above and under water.

Sand tends to reach out towards the islets as a consequence of the local shelter provided by the islets. This morphological feature is called a tombolo and shows very clearly the mean direction of approach of waves: N to NW. 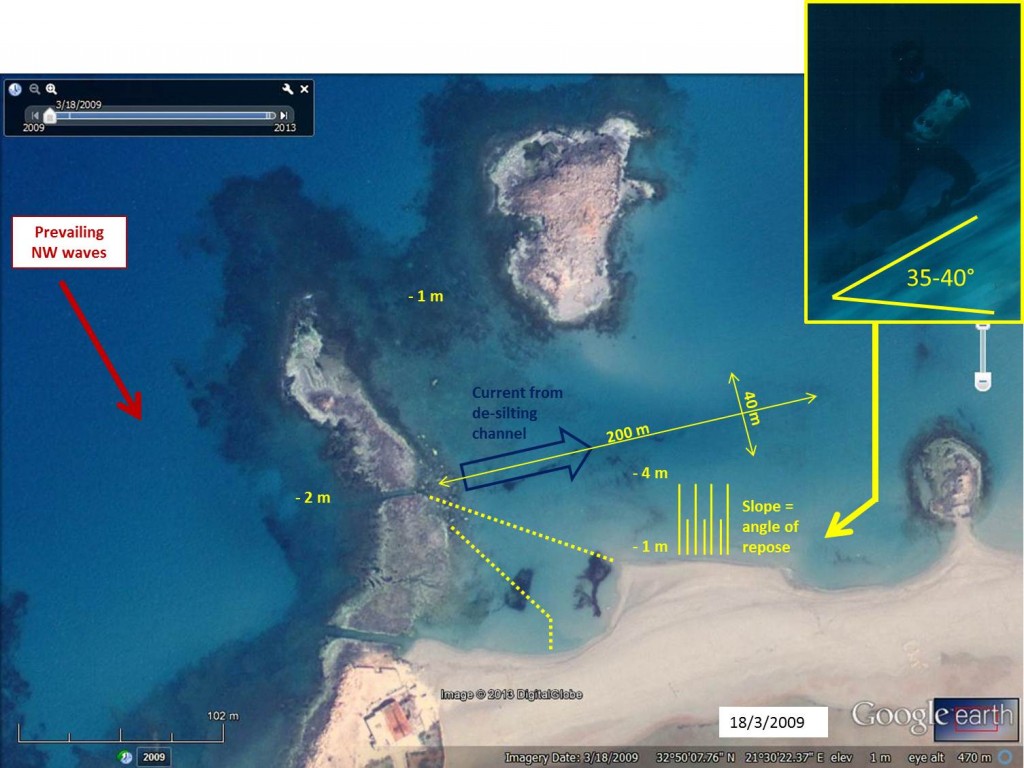 Channel 2 was identified by JP Misson as a de-silting channel cleaning the anchorage area from sand deposits.

The current in this channel is due to waves incoming from the N to NW direction, i.e. wave set-up due to wave breaking leading to a slightly higher water level on the western side than on the eastern side of the rock outcrop. Similar de-silting channels seem to have been built also at Centuncellae (Italy), Caesarea Maritima (Israel), Sidon (Lebanon).

This current seems to have maintained the El Hanieh anchorage area at a water depth of around 4 m over a length of around 200 m and a width of around 40 m. This is remarkably efficient!

The south slope of the anchorage area is made of sand staying at its angle of repose of 35-40° as can be seen on the underwater picture.

The stretch between the rock outcrop on the west side and the northern islet is around 1 m deep and consists of rock that might possibly be the remains of an ancient breakwater.

Let’s hope further underwater investigations will provide
some answers to these questions.