Many rubble mound breakwaters have been built in antiquity to improve sheltering for ships. A typical example is shown above (Kissamos in Crete, from Hariclia Hampsa’s PhD thesis in 2006). This particular structure has been preserved as it survived 2000 years of wave attack … as it was raised around 3 m by tectonic movement. However, most of the ancient breakwaters were destroyed by wave action and remains are found under water as “submerged breakwaters” (more on breakwater remains …). The process of destruction by waves was not all that clear and further analysis was undertaken by the author.

The present analysis of long term stability concentrates on the worst possible wave conditions, considering that they will eventually occur in the long term. This means that we consider only cases with waves breaking between the toe and the crest of the submerged structure. Hence, the local wave climate must include waves large enough to break on the water depth in front of the submerged structure and breakwaters in very sheltered areas are not considered in this analysis. Similarly, breakwaters located in water depths larger than say 10 m are not likely to be subjected to breaking waves in the Mediterranean area and are therefore not considered here. In such cases, a “design wave” for the structure is required. 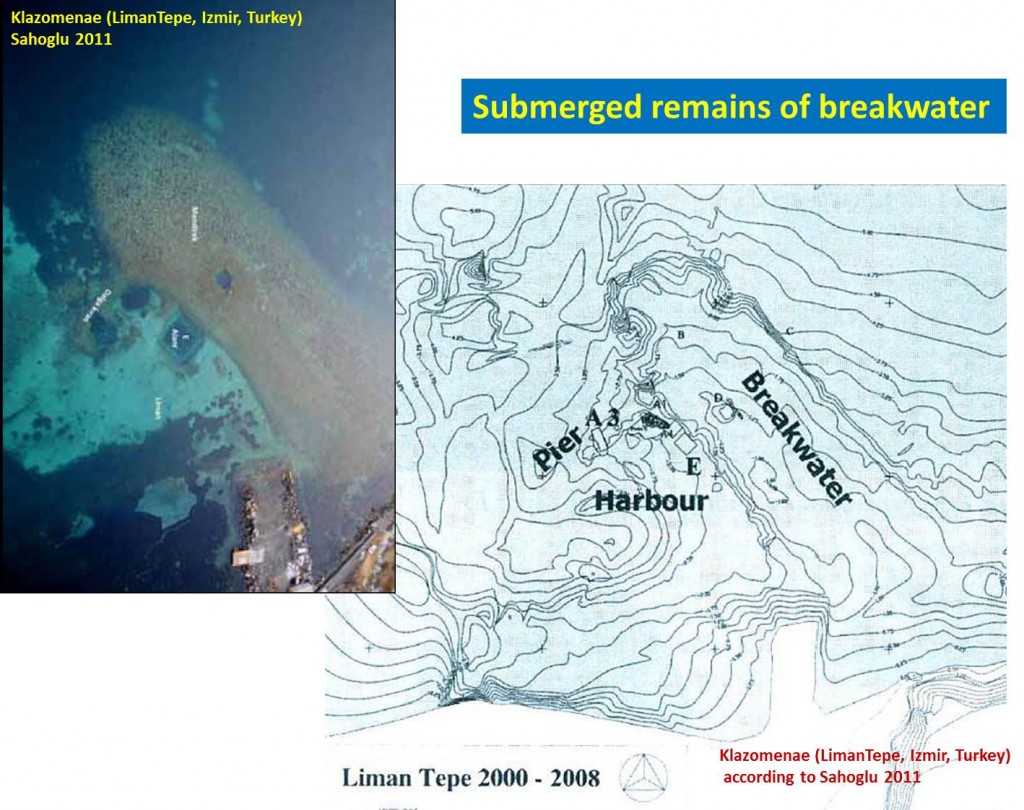 A typical example of a submerged breakwater is at Klazomenae, at Liman Tepe (near Izmir, Turkey). The remains are 140 m long and 45 m wide in a water depth of around 4 m at its seaward roundhead. The crest of the structure is now at 1 to 1.5 m below present sea water level. Due to tectonics, the ancient sea bed was around 0.50 m higher, and the water level was about 0.50 m lower (according to N. Flemming, 1973).

It must be noted that the location of this structure is rather sheltered from offshore waves and this may explain why this structure has survived so well in time.

This ancient harbour has been intensively studied by Vasif Sahoglu and his colleagues from the Ankara University Research Centre for Maritime Archaeology.

Many other examples are to be found in “Remains of ancient breakwaters”.

The following pictures show the process of reshaping of a low crested breakwater consisting of relatively small rubble at SOGREAH’s Laboratory in 2006 (offshore is on the left side and waves propagate from left to right). 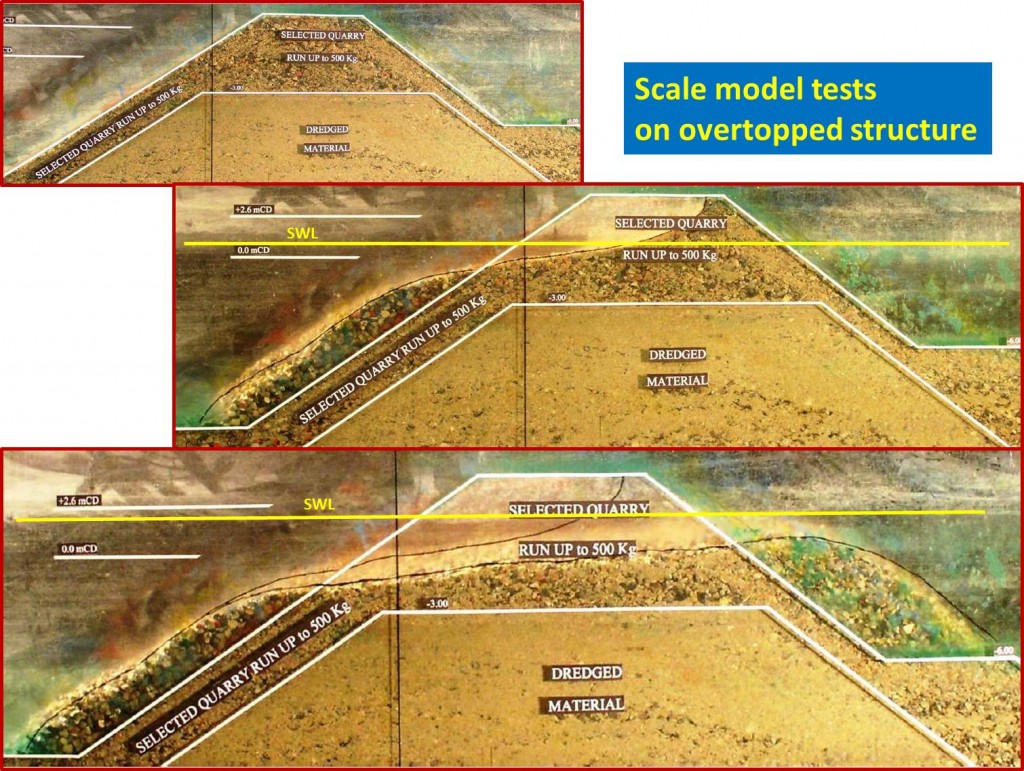 The middle picture shows the structure after a sequence of around 1700 waves with significant height Hs = 60 mm and peak period Tp = 1.15 s. Waves were obviously not breaking before the seaward toe of the mound as Hs/h = 0.13 only, but broke on the structure front slope. This induced an erosion of the front slope, moving material from the crest down to the seaward toe.

The bottom picture shows the structure after a sequence of around 1500 waves with Hs = 80 mm and period Tp = 1.35 s. Waves were still breaking on the structure front slope. This induced further erosion of the crest, moving material from the crest to the rear side.

The main limitation of these tests is that they were performed with non breaking waves. Hence, wave attack on the structure was not the worst possible.
This structure was nevertheless changed from an emerging breakwater into a submerged breakwater.

Some unpublished scale model tests were performed in a wave flume at SOGREAH’s Laboratory in April 1993 by the author. 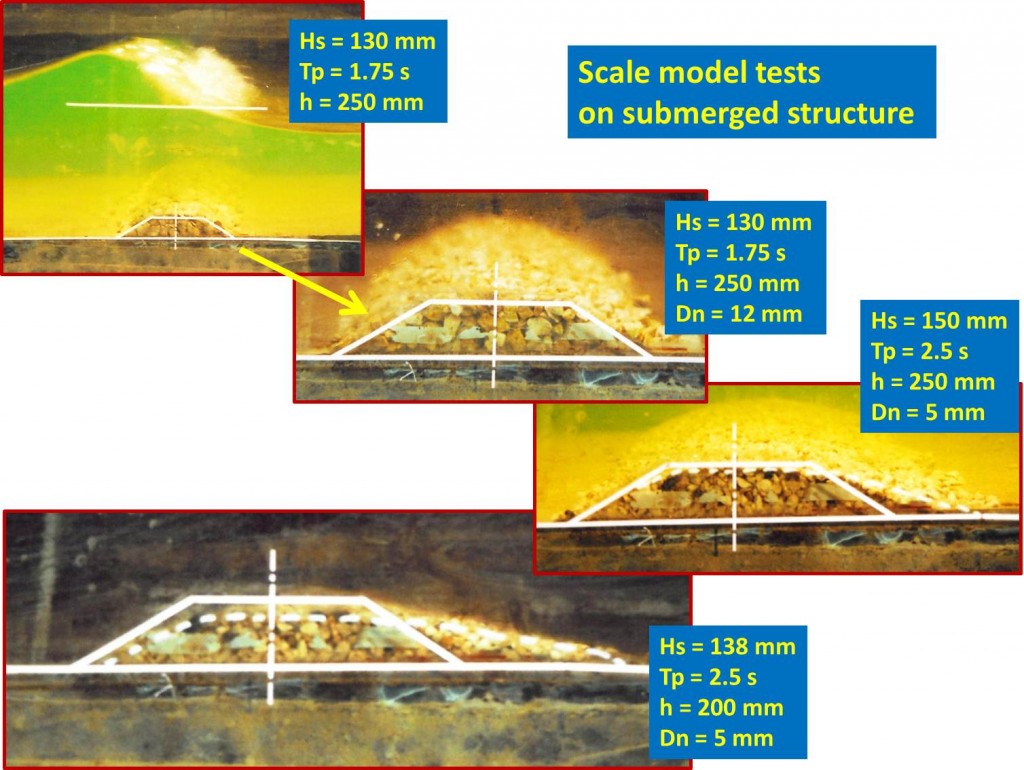 The submerged rubble mound was given a very simple trapezoidal shape with 1:1.5 slopes, 40 mm high, and 100 mm long on the crest. The water depth h was 250 mm for most tests. The wave height was increased step by step during the test until full wave breaking occurred and no further increase of significant wave height could be obtained. The wave period was set at Tp = 1.75 s for most tests. Wave breaking was of the “spilling” type for all tests. The rubble mound was built with one single type of stone defined by its nominal Dn = 5.0 mm for the smallest size tested.

The structure was reshaped by wave attack and finally stabilised in a rounded shape featuring a steeper front slope and a milder rear slope. The crest was lowered somewhat (2 to 3 Dn) and the rear toe moved backwards (about 18 Dn).

These tests are of course very limited and modest, but they yield most important results enabling a much wider perspective on the processes involved.

It is concluded that undersized emerging rubble mound breakwaters reduce to submerged breakwaters and that the crest can be located as follows:

For a given stone size, submerged breakwaters stabilize to the predicted crest level after long term wave attack in breaking wave conditions.

This result is obviously very useful for the design of breakwater construction phases, when the core of the structure may be exposed to storms inducing waves breaking on the structure. It is also useful to determine the long term equilibrium level of the crest of undersized breakwaters and near-bed rubble mounds protecting pipes.

For use in the Mediterranean Sea on ancient breakwaters, a water depth of around 10 m may be considered as a maximum in the figure above because ancient structures were not (often) built in larger water depths and because very large waves (say Hs > 6 m) are not frequent enough to induce significant damage in the long term.

Further scientific details are to be found in a more comprehensive pdf publication on “The long-term failure of rubble mound breakwaters”. It was also published in Méditerranée, revues.org .